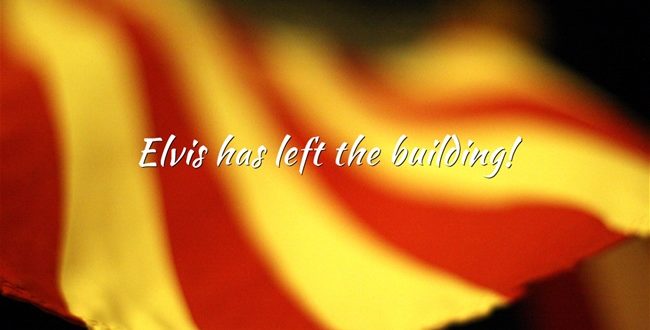 Example: “You’re a very good chef, but your pumpkin soup is the bee’s knees!”

Meaning: When something is done badly to save money or time

Example: The builders cut corners on the quality of the materials and so the building eventually collapsed .

3) Elvis has left the building

Meaning: When something comes to an end -when a show is over.

Example: Ladies and gentlemen, Elvis has left the building. Thank you and good night.

Where does it come from?    The phrase was first used by promoter Horace Lee Logan on December 15, 1956, near Shreveport, Louisiana. Elvis had appeared in the middle of the night’s lineup, and Logan needed to quiet the audience so that the remaining performers could play.

“Elvis has left the building” is also heard at the end of Elvis’ March 1961 Pearl Harbor Memorial benefit concert, after Elvis exits at the end of “Hound Dog” and a short coda from the band.

4) Read between the lines

Meaning: To deduce a meaning which isn’t made explicit in a speech/sentence

Example: “Read between the lines of the Prime Minister’s statement, it seems he will stand for re-election.

5)  Hear it on the grapevine

Example: “I heard on the grapevine that Kelly and jake are getting married next year. Do you think it’s true?”

A famous song by Marvin Gaye in 1968 was titled “I heard it through the grapevine”.

6) To hear something straight from the horse’s mouth

Meaning: To learn something from the authoritative source

Example: Q. “Are you sure the company is hiring?” A:”Sure! I heard it straight from the horse’s mouth! The Human Resources Manager told me”.

Meaning: When a person you are speaking about, suddenly arrives.

Meaning: something positive that, at first, seems disappointing.

Example: “Losing that job turned out to be a blessing in disguise, as he started studying again and finally got the degree in Economics”.

Meaning: To avoid changing a situation which could become complicated.

Example: Tom: “I’m not sure whether my boss is disappointed about my recent report. Should I ask him?”

Ellen: “If he hasn’t told you anything, I’d say to let sleeping dogs lie.

10) Kill two birds with one stone

Meaning: To accomplish two different things at the same time

Example: ” I bumped into both of my managers in the canteen so I killed two birds with one stone and told them about the client’s problem..